“The definition of insanity is doing the same thing over and over again and expecting different results.” Albert Einstein 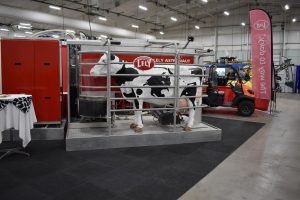 We made many changes to our Lely Center Mid-Atlantic booth this year at the Keystone Farm Show in an effort to try something different. The first to change was our booth design. After polling the “Lely Users” group on Facebook, we discovered that the number one thing that made farms want to stop in a booth at a show was a place to sit and rest. For that reason, we decided our booth would have a theater-like section with plenty of seats and a homemade movie to watch featuring our local farms. The seats were a big success! Whether they were farmers or not, many people took advantage of the place to take a break and learn more about our farms.

Our second change was positioning the Lely demo robot on an angle in our booth versus placing it parallel to the walk way. Our goal was to capture our audience in our booth and reach more customers, instead of having people hang out in the isle. The team agrees that this was also a success. It helped with traffic and allowed us to catch more people’s attention while attracting them into our booth.

At Lely Center Mid-Atlantic, we believe that the best way for a prospective customer to learn more about robots is taking them directly to the source: a current robot customer. For that reason, we decided to schedule various robot customers in our booth each day of the show. Unfortunately, I wouldn’t say we had much success with this. I felt we promoted the event as much as we could, yet we still did not see anyone in our booth who came specifically to talk to one of our farmers.

Finally, we began a four-month promotion at the beginning of the farm show: a raffle for a free Luna Cow Brush. We were delighted that 50 farmers signed up for their chance to win! This promotion will run until April 30 and will be drawn on May 1, 2018. Stay tuned for your chance to sign up via our Facebook page.

All said and done, the Keystone Farm Show was a wonderful way to catch up with customers, old and new. We always enjoy the conversations and the opportunity to connect with people in a different setting.