If you follow our Facebook page, you know that the months of February and March were packed full of exciting start-ups. Now that our new farms have had the chance to settle into a routine, I asked them to reflect upon their experiences so far.

Kendall Byers of Racoon Valley Dairy (RVD) started up his one robot into a retrofit facility in January and is milking 55-60 cows. He was previously milking in a flat bed parlor. Kendall has been milking for 35 years and is a first-generation dairy farmer. He loves farming and especially likes being self-employed. The farm, which is located in Millerstown, PA, also has chicken houses on the property and 265 acres of crops. Kendall’s current goal for the dairy operation is to ship 10,000 lbs of milk with 55 cows or less.

St. Brigid’s Farm (SBF) is located in Kennedyville, Maryland. The farm started up their single unit in early April and is milking 50-60 pasture grazed Jersey cows. St. Brigid’s is owned and operated by Robert Fry and Judy Gifford, both of whom are third-generation dairy farmers who have been farming since 1996. Judy is responsible for herd management and daily operations, while Robert, who is also an independent nutritionist, oversees the nutrition and veterinary responsibilities for the herd. St. Brigid’s founding goals for the operation are economic viability, environmental stewardship, and involvement in the community. Those goals still drive them today, 20 years later. They feel the key to attaining the first two goals are Jersey cows which produce high quality milk and graze on high quality grass. All 62 acres of the farm are planted in permanent pasture, and the farm also direct markets their Jersey beef and veal. You can find this farm on Facebook here. 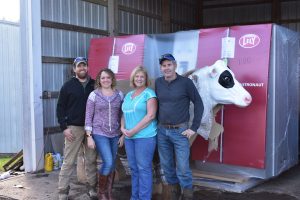 Hemsarth Dairy LLC (HDL), located in Millville, PA, started up 4 A4 robots into a retrofit facility in late March.  Greg Hemsarth, a third generation farmer, answered the following questions for the dairy. He helps run the farm with his father, Bruce. The farm was a wedding gift to his grandparents, who started milking with 30 Guernseys. In 1993, Bruce expanded the farm to 180 Holsteins. Today, the farm milks about 200 cows. Greg’s favorite parts of farming is the strategic management. He says, “Every decision is like making the next move in a chess match. You need to think about all the possible outcomes and assess the risk/reward.” Hemsarth Dairy strives to provide a comfortable quality of life for their employees and their families, as indicated in their mission statement. Through a partnership with Greg’s uncle, the farm produces all of their own corn silage, haylage, and dry hay to meet the herds requirements, about 400 acres in total. The family also owns and operates Purple Cow Winery in Bloomsburg. For more information on the winery, check out the page here.

1. Why did you make the transitions to robots, and what made you decide to work with Lely?

RVD– We made the decision to switch to milking with robots because we had problems finding and keeping good help. We chose Lely because we felt they were the best fit for our farm after doing our research.

SBF– When the third college students in as many months left within weeks, we knew we had to do something different. I (Judy) had milked most of 2017 with no help and did not want to repeat that in 2018. Our first contact in October 2017 to explore the possibility of installing a robot was with Amos Fisher. His prompt response and innovative suggestions regarding layout and cow flow really impressed us. We did interview three other companies and soon realized none of them could provide the follow up service and support of Lely Center Mid-Atlantic. Also, Lely was the only company that could meet our time frame of start-up by April 1.

HDL–  We went with robots because our parlor was in disrepair and, despite paying around $15/hour for milkers, we couldn’t find or keep reliable parlor help. In the end we went with Lely for two reasons: barn layout and data availability. We are a retrofit, and working with the government on storm-water management really put a limit on the footprint of new construction. Working within those confines, we couldn’t come up with an easy-to-use layout for some other systems. Secondly, we already had a high-tech data system in our parlor. Some of the systems out there didn’t give us any information beyond what was already available in my parlor. If I was going to invest in technology, I wanted to improve the information I was getting out of it as well. The Lely robot does that.

2. How did start-up go? Did it live up to your expectations: good, bad, or otherwise?

SBF– Start-up went very well. We had heard about some dreadful start-ups but we were always optimistic that ours cows would take to the change in routine in a short time. A few needed pushing into the robot for several days but most were walking in easily before the Lely team left. We were getting a good night’s sleep by the fifth day.

HDL–  Start-up went better than planned. I think that was mostly because the cows were walking through the construction zone through the entire process. Once the robots were set, we removed the barriers and cows could walk up to and check out the robots, but they couldn’t go in. Eventually we opened the gates and walked all the cows straight through the boxes on the way to the parlor for a few days. This made getting the cows in the boxes really easy at start-up.

3. What has been the biggest lesson in milking with robots so far?

RVD– Figuring out a good feeding program! It has completely changed!

SBF– Listen to your cows and go with the flow. It was tempting in the early days to micro-manage their routine, but we have quickly abandoned that bad habit.

HDL– Completely changing the approach to feeding is a big lesson we are still trying to figure out. Stay away from the computer except at fetch time. If you are always looking at it you will always be going to get “just one more fetch cow.”

4. What positive results have you seen with the cows in switching to robots?

RVD– We really like the information we are getting on eating and health habits.

SBF– Milk production has held very steady despite the transition to the robot and to the pasture. High producing cows as well as low producing cows are now fed to meet their needs. Our somatic cell count has remained as low as it was before start-up. Cows get to sleep in a little later and so do we!

HDL–  The cows are calmer, and lameness has decreased. We did not see an increase in mastitis like some said we would see.

5. Would you change anything in your layout or decision-making process?

SBF– The other day we commented that we were very happy with our design. We remodeled an existing building so there were challenges because of limited space. Our team of Lely Center Mid-Atlantic and E&F Ag worked together very well and all had cow experience, which helped make our project a success.

HDL– There are some minor things I would tweak, but nothing major- make a gate a little longer, or switch which side it latches on, etc.  When it comes to barn design, I would have included the lead robot technician in the meetings more to save us a few frustrating days of installation.

6. If you could give advice to other Lely producers going into start-up, what advice would you give?

RVD– Get cows used to using robots and going through the box prior to the start-up date. Have a good feed nutritionist on board who has experience with robots!

SBF–  First, find a pellet that the cows really like. Our cows rejected three pellets before we settled on the current textured feed. You do not want a bin full of feed that is not acceptable to the cows. Second, let the cows go through the robot several times before start-up to get used to it and get it dirty. We had to cover the drain initially with some black matting and moved the tickler out of the way. Schedule good people to help but not too many. There is a lot of waiting so patience is important. Make a week’s worth of food ahead of time and have good coffee.

HDL–  Join the Lely Facebook group! Amazing tech help, tips, and encouragement. Dry late lactation and low producers early. Don’t waste your time training them. They will just be chronic fetch cows this lactation. Be aware that your fetch protocol will constantly need to adapt as your cows start to visit on their own more. The industry pushes SOP (Standard Operating Procedure), but there can’t be an SOP for the fetch list in the early weeks. As a manager that tries to provide consistency for both cows and employees, this was one of the more frustrating parts of the month or two after start-up.

Congratulations to all three new Lely farms on their successful start-ups. We look forward to our continued work together to help you to reach your goals.